With the olive harvest now coming to a close, we thought this was a good theme to kick off the first of our monthly blogs from Casa Olea. Hope you find this interesting and we’ll be back in February with more travel ideas and news from Andalucia.

So, how are olives picked?

The olive harvest takes place in the winter, between November and March depending on the area, weather and olive variety. There are hundreds of varieties of olives, with the most abundant in the Sierra Subbetica area being Picudo, Hojiblanco and Picual.

Picking the olives is no easy task! The olives which have already fallen to the ground are collected into baskets and kept separately – olives from the floor can still be pressed but as they are inferior “damaged fruit” they cannot be designated “Extra Virgin” quality.

Nets are then laid under the tree so it can shaken and beaten. Traditionally, just like back in Roman times, this is done by hand using sticks/poles to dislodge the fruit from the tree. Alternatively, some farmers use a vibrating machine which is attached to a branch to shake the olives into the nets below. The nets full of “good olives” are collected up and emptied into a trailer. 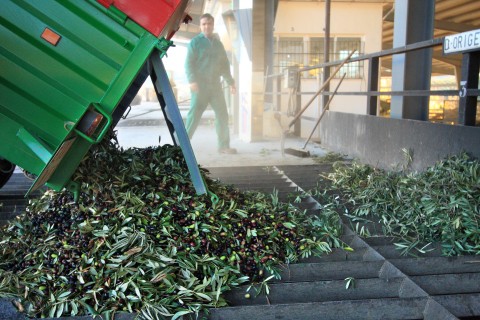 From Olive to Oil

At the end of a hard day’s picking, the trailer is transported to the almazara (mill) to join the queue down the street as all the local farmers arrive to weigh and process their olives. In order to produce the highest quality olive oil the crop must be pressed on the same day as picking.

At the mill, the olives are separated from the dirt, leaves and stones on a series of machines and conveyor belts, before being cleaned and weighed en route to the tolva (deposit) to be pressed. A sample is taken of the olives, with the bag being labelled and sent off to an external laboratory for testing. The farmer is paid a few months later based on the weight and sample quality of his olives. 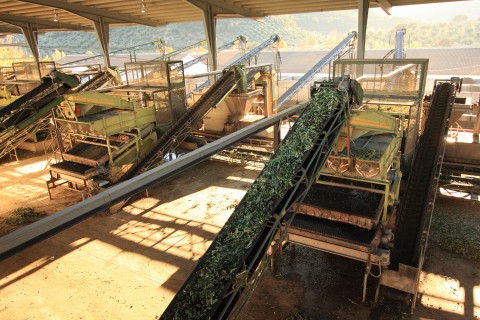 Once cleaned, the olives are ground to form a paste, which is then whisked in a maquina batidora (mixing machine) for 20-40 minutes so the oil develops its flavour from the paste. The mixture is heated to a maximum temperature of 89F which increases the yield and is still low enough to be considered “cold pressed”.

Next, the paste is sent through a horizontal centrifuge, a cylindrical container that is rotated at high speeds, to separate the solid from the liquid. The next step is to separate the liquid, which is made up of both water and olive oil, by passing it through a vertical centrifuge. Once this final process is completed, all that’s left is the olive oil, which is then stored in huge, temperature-controlled stainless steel tanks, each of which can hold up to 50,000 kg of olive oil!

Once the oil has been left to decant (naturally) in the tanks for a few weeks, bottling takes place. Olive mills in Andalucia use glass bottles, metal tins, ceramic jugs or plastic bottles of varying dimensions. Every stage of the process is strictly controlled and sampling occurs throughout to produce the finest Extra Virgin Olive Oil. 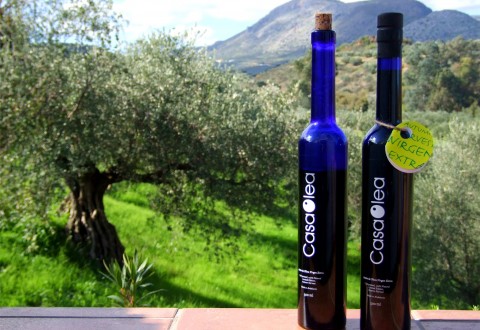 * There are over 750 million olive trees cultivated worldwide. Spain is not surprisingly the largest producer of olive oil (approx 40%), with Italy coming in second (25%). Andalucia is the largest olive growing area on earth. Spanish olive oil is often exported to other countries (eg Italy) for its bottling and packaging, hence the true origin of the oil is often unclear. Make sure you buy Spanish...!

* This export of Andalucia’s olive oil to Italy has gone on for centuries – at the height of the Roman Empire, as much as 4 million gallons of oil was transported each year from Baética (Andalucia) to Rome. Such was the scale of the trade that one of the “hills” of Rome (Monte Testaccio) is actually the ancient world’s largest garbage dump - a 150-foot-high mountain of discarded amphorae, the ceramic jars used for importing the oil. Each one of these 25 million jars had its own export data stamped on the inside of the pot – information which was designed to limit fraud such as the merchant’s name, place of export and the weight of the jar and oil etc.

* Visit the Roman villa in Almedinilla near Casa Olea, once a luxurious country retreat for a high-ranking merchant or official, complete with mosaics, murals and under-floor heating!